GHOTKI: The Executive Director, National Institute of Cardiovascular Diseases (NICVD) Monday announced to establish Chest Pain Units (CPUs) at every district of Sindh, which would be linked with already functioning the eight satellite centers of NICVD in different cities of the province and urged the Sindh health department to cooperate with them in taking over cardiology units at the civil and district hospitals in various cities of Sindh.

“We have decided to establish our chest pain units in each and every district of Sindh, which would be connected with our satellite centers that are already functioning in eight cities of the province. I would urge Sindh government and the provincial health department to cooperate with us in taking over cardiology units of district hospitals in the province to transform them into CPUs”, Prof. Nadeem Qamar said while inaugurating the first CPU of the NICVD in District Ghotki.

NICVD is already running eight Chest Pain Units in Karachi that provide first-aid to a person in case of heart attack and shifts it to the main cardiac facility in a life-saving ambulance for the further intervention, especially for the Primary PCI or angioplasty in emergency. The chest pain unit established at Ghotki is first such unit outside Karachi. 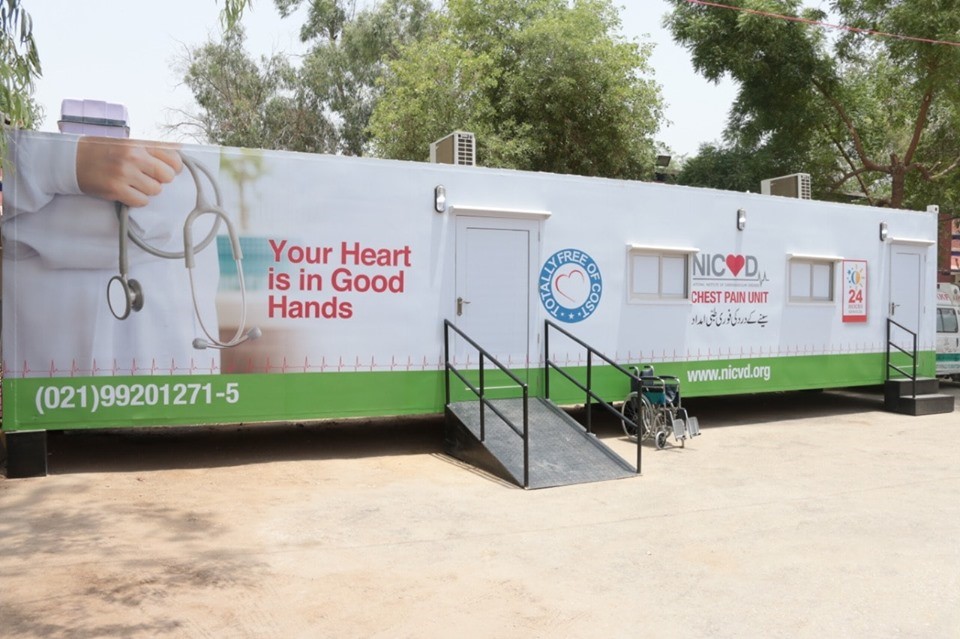 Accompanied by eminent cardiologist Prof. Javed Akbar Sial and Incharge of NICVD Sukkur Dr. Muhammad Hashim, Prof. Nadeem Qamar also inspected the non-functional cardiology unit at Taluka Hospital Ghotki and announced that they would request the Sindh government to hand it over to the NICVD so that state-of-the-art cardiac care facilities could be provided to the residents of Ghotki and adjoining areas.

He said the decision to establish first chest pain unit outside Ghotki was taken after learning that on average five to six patients were daily being brought to the Taluka Hospital Ghotki due to heart attacks and added that their chest unit, which would work round the clock and would be connected to NICVD Sukkur, would be helpful in saving hundreds of lives in the remote district.

“This chest pain unit in Ghotki would be connected with NICVD Sukkur through a state of the art ambulance and after provision of first aid by a trained and qualified cardiologist, the patient would be shifted to Sukkur for primary PCI or any other procedure required to save the life of the patient”, he said.

Talking to mediamen on the occasion, Prof. Nadeem Qamar announced that they were going to establish chest pain units at all the districts of the province during the current fiscal year and urged the Sindh government and the health department to cooperate with them in taking over cardiology units of districts hospitals so that they could be transformed into mini cardiac-care units.

Deploring that young bread and butter earners were dying due to cardiovascular diseases, especially heart attacks in Pakistan, he said satellite centers and chest pain units established by the NICVD were saving thousands of lives annually by providing best-available cardiac treatment to the people and added that they were now launching a preventive cardiology program to prevent cardiac ailments in the country.

“We have hired one of the best cardiologist of the country to run our preventive cardiology program and we hope that we would be able to reduce the ratio of cardiac ailments in our population by promoting preventive measures”, Prof. Qamar said and urged the print and electronic media to promote healthy lifestyle so that people could be prevented from having heart attacks and cardiac failures at early ages.

Medical Superintendent of the Taluka Hospital Ghotki Dr. Fakir Hussain Shah praised the NICVD administration for establishing their chest pain unit at their health facility and urged the institute to take over their cardiology unit, which is lying vacant and functionless for last several years due to lack of trained and qualified staff.

“I would urge the NICVD administration to take over the cardiology unit of Taluka Hospital Ghotki and transform it into a mini-NICVD. We are daily having five to six patients with heart attacks but due to absence of trained and qualified cardiologists, we have to send them to Sukkur, which takes time”, Dr. Fakir Hussain Shah added.