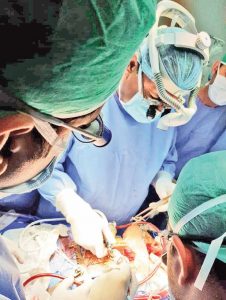 announced a successful implant of a mechanical pump known as Left Ventricular Assist Device (LVAD) in the chest of a female patient whose heart was not functioning properly and required mechanical support to pump blood in her body.

Although the NICVD administration and surgeons called it “an artificial heart transplant”, independent experts said LVAD “is just a supportive device that helps the pumping of blood from the left ventricle of a patient whose heart’s left ventricle becomes weak, while it does not replace the heart of the patient with the mechanical device”.

But Executive Director NICVD Prof Nadeem Qamar and transplant surgeon Dr Pervaiz Chaudhry, who has returned from the United States and led Monday’s implant surgery, insisted that they had “inserted” an artificial heart in the chest of the elderly female patient, who was doing fine after the surgery and would be able to breathe without support and talk to her family from tomorrow (Tuesday).

To a query, he said an LVAD implant costs around 11-12 million, but not a single penny was received from the attendants of the patient for this complicated and costly surgery. The NICVD had identified former hockey goalkeeper Mansoor Ahmed as the first patient to receive the LVAD, but he died before the surgery could be performed on him.

Prof Qamar said that except for an American nurse, Abigail Boultinghouse, all the surgeons, doctors, postgraduate students, nurses and technicians were Pakistanis who would learn a lot from these surgeries, while the US nurse would train local nurses in dealing with these patients after surgeries.

He claimed that the NICVD was becoming the world’s largest cardiac-care institute and after successful implants of more LVADs it would become a centre of excellence in Pakistan. He added that they were going to establish 10 more chest pain units (CPUs) in Karachi in the coming days.

Dr Pervaiz Chaudhry said he had been performing implant surgeries for the last 10 years. Terming the implant of the LVAD in the female patient at the NICVD successful, he vowed to continue these implants in the coming days, months and years to come in Pakistan.

He explained that an LVAD implant was a “destination therapy” for the patient, who would not require any heart transplant throughout her life as this device would help her heart pump blood from seven to 10 years.

Caretaker health minister Dr Saadia Rizvi, who paid a surprise visit to the NICVD on Monday noon, congratulated the NICVD administration, especially Prof Qamar, Prof Nadeem Rizvi and the team of surgeons on the successful LVAD implant. But she added that instead of going for heart transplants, they should strive for the provision of basic heart-care facilities to the masses.

She was of the opinion that the standard of public healthcare facilities should be improved to an extent that private hospitals and facilities felt it impossible to survive and “start dying” due to lack of patients.

The minister urged the NICVD administration to concentrate on human resource management so that similar hospitals could be established in other parts of the country.

“LVAD does not replace the original, organic heart; instead, it is a device that supports the heart to pump blood. Most of the times, this device is implanted as Bridge To Transplant (BTT) as patients require heart transplant to live a normal life,” a senior cardiologist from a leading heart institute told The News.

The family of the patient who underwent the LVAD implant surgery said they were satisfied with the outcome of the procedure although the patient had not regained consciousness. He added that despite the costly surgery, not a single penny was charged from them by the hospital.

“My mother, Nafisa Manoon, is 62 years old and she qualified for the LVAD transplant at the NICVD. They have not charged any money from us although this is very costly and complicated surgery,” Faisal, son of the woman, told The News.

He, however, said the NICVD had demanded from him to arrange 18 bottles of blood for the surgery, and now they were asking him to arrange another 30 bottles, which was a very cumbersome task for him.