HYDERABAD: National Institute of Cardiovascular Diseases – NICVD in collaboration with the Government of Sindh has established the new building of NICVD Hyderabad at Qasimabad, Wadhu Wah Road, Hyderabad to provide cardiology Services to the population of Sindh Province at their doorstep totally free of cost.

The soft opening of the new building of NICVD Hyderabad was performed by Executive Director of NICVD, Professor Nadeem Qamar on independence day.The NICVD Hyderabad is another milestone to serve the population of Sindh, with a vision to benefit patients with early and easy access to quality heart healthcare facilities.

Karachi: National Institute of Cardiovascular Diseases (NICVD) in collaboration with the Government of Sindh has inaugurated its 18th “Chest Pain Unit” at Keamari, Karachi to facilitate patients with chest pain with easy access and free of cost services.

Talking to media, Honorable Chief Guest, Abdul Qadir Patel termed the establishment of the 18th Chest Pain Unit at “Keamari Karachi” as another gift for the people of Karachi. Saying this Chest Pain Unit will link with the main NICVD, where all cardiac care facilities, including angiography, angioplasty and cardiac surgeries are available.

He said that National Institute of Cardiovascular Diseases – NICVD has introduced a new era of heart healthcare with the inauguration of “Chest Pain Units” to serve the nation at their quick approachable areas. This service is one of its kinds and is available for 24/7 throughout the year.

PPP MNA further added that in these CPUs a total of 408,886 patients have been treated and saved over 9,327 lives, since inception to date, which is incomparable performance by any means in the world.***

Boy survives knife to the heart with NICVD surgery

Rehan was reportedly bleeding heavily and was in critical condition 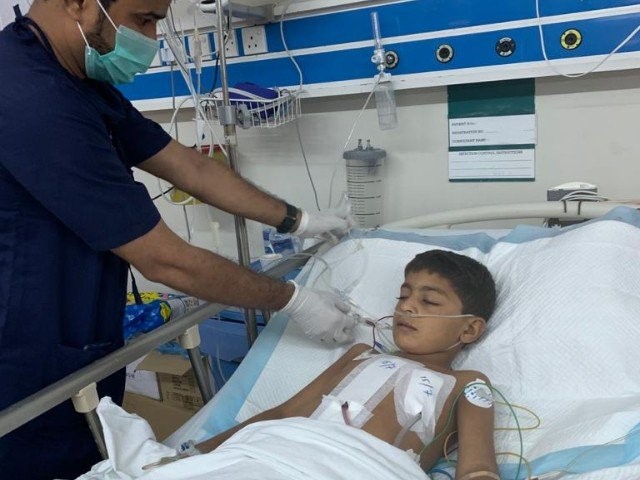 KARACHI:
The life of a 10-year-old boy, Rehan, was saved by doctors performing a complicated heart surgery at the National Institute of Cardiovascular Diseases (NICVD) on Thursday.

A knife had pierced Rehan’s chest and entered his heart, with doctors from several private and public hospitals refusing to perform the dangerous procedure. The boy was reportedly bleeding heavily and was in critical condition.

He was shifted to NICVD, Dr Abdul Sattar Shaikh recommended emergency surgery. He was immediately intubated and shifted to the operation theatre where the surgery was performed successfully by Dr Shaikh, paediatric surgeon Dr Sohail Bangash and anaesthetist Prof Amin Khawaja.

According to Rehan’s parents, he had been visiting his uncle’s house in Karachi from Nawabshah when he sustained the injury while playing with other children.

Talking to the media, Dr Shaikh and Dr Bangash disclosed that the boy’s heart had been ruptured by the knife and they had repaired it.

They stated that he was still at the hospital recovering from the surgery, adding that any further delay in the surgery could have endangered his life.

Sindh Minister for Information Technology Nawab Muhammad Taimur Talpur inaugurated the CPU. Officers of the NICVD were also present on the occasion.

Talpur said the Sindh government was serving the people of Sindh and the CPU facility was its proof. He congratulated the NICVD administration and Prof Qamar on the occasion, saying that such units and satellite centres of the institute had helped save thousands of lives in Sindh.

He added that the NICVD’s CPU was a gift from the Sindh government to the people of Umerkot and its peripheries. After the establishment of the cardiac facility, no cardiac patient in Umerkot would need to go to big cities because a state-of-the-art cardiac facility was available there free of charge, he remarked.

“Within the last three years, these CPUs treated more than 400,000 patients and saved over 9,129 lives [of people] who were having heart attacks but managed to reach these CPUswhere they were given immediate first aid and then they were dispatched to the main NICVD where they were given specialised treatment. This shows that Sindh is far ahead than other provinces,” the provincial minister maintained.

He urged the media to disseminate information about these CPUs as during the last three years, cardiologists and technicians at these CPUs in 13 different locations in Karachi and one each in Ghotki, Tando Bago and Jacobabad had saved thousands of lives. “The NICVD is a flagship programme of Sindh government and its CPUs and satellite centres are serving the heart patients from across Pakistan as people from other provinces are also coming to Karachi and other parts of Sindh to avail quality cardiac treatment, which is being offered free of charge,” Talpur said. 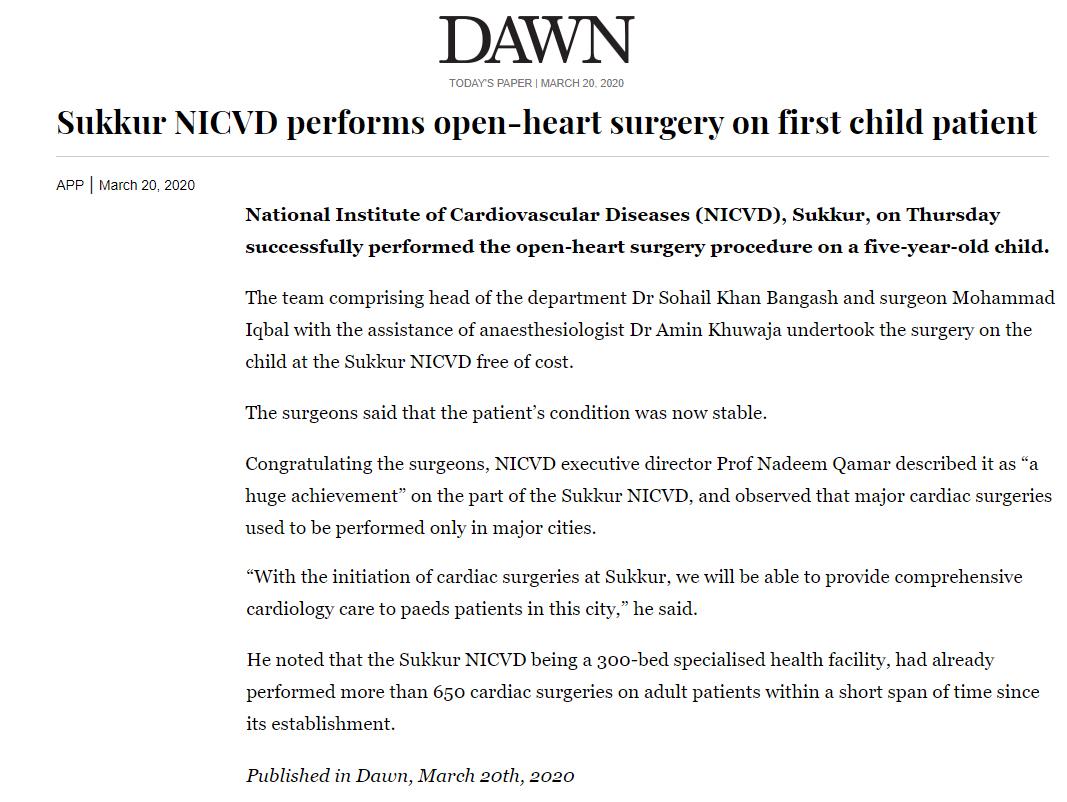 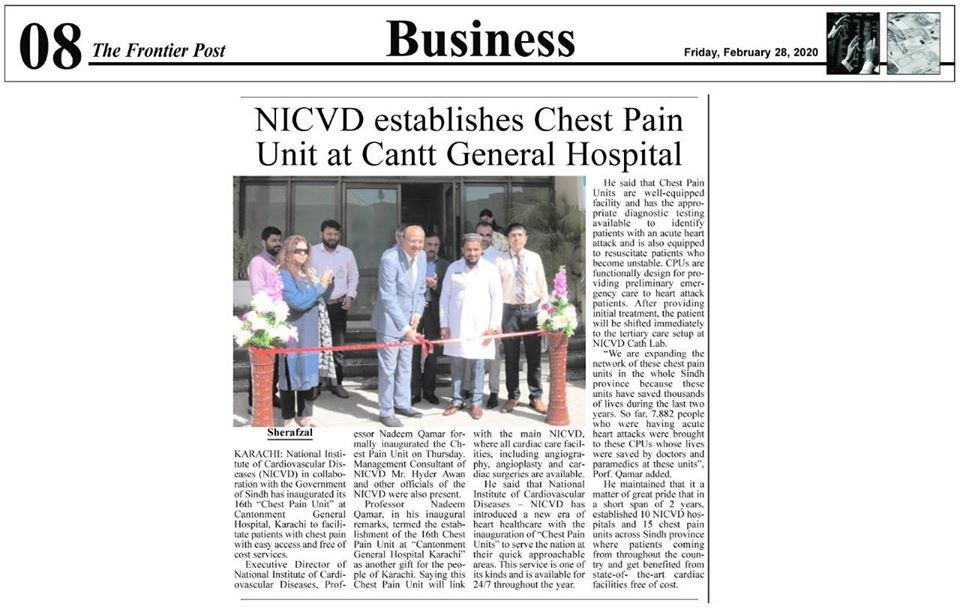 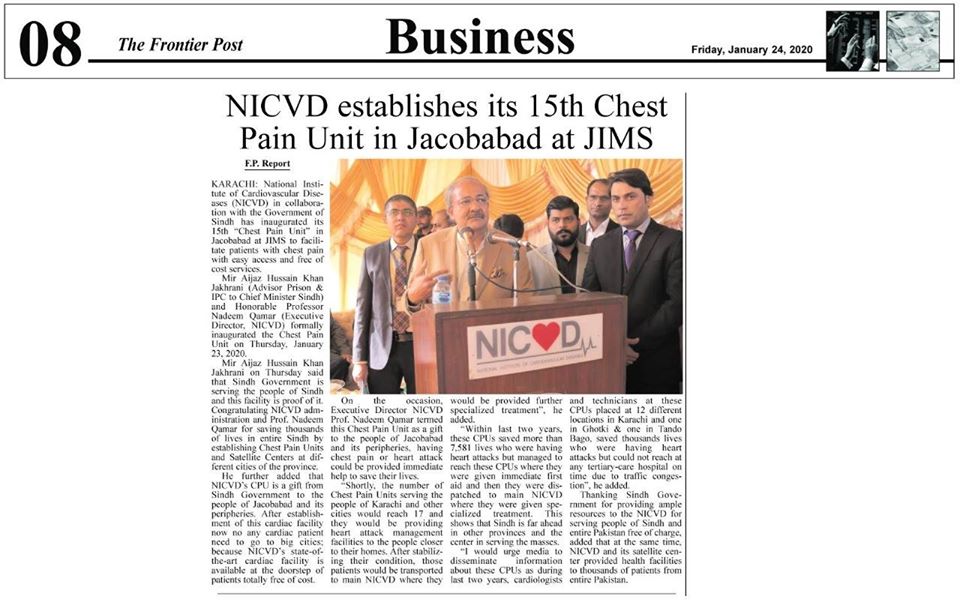 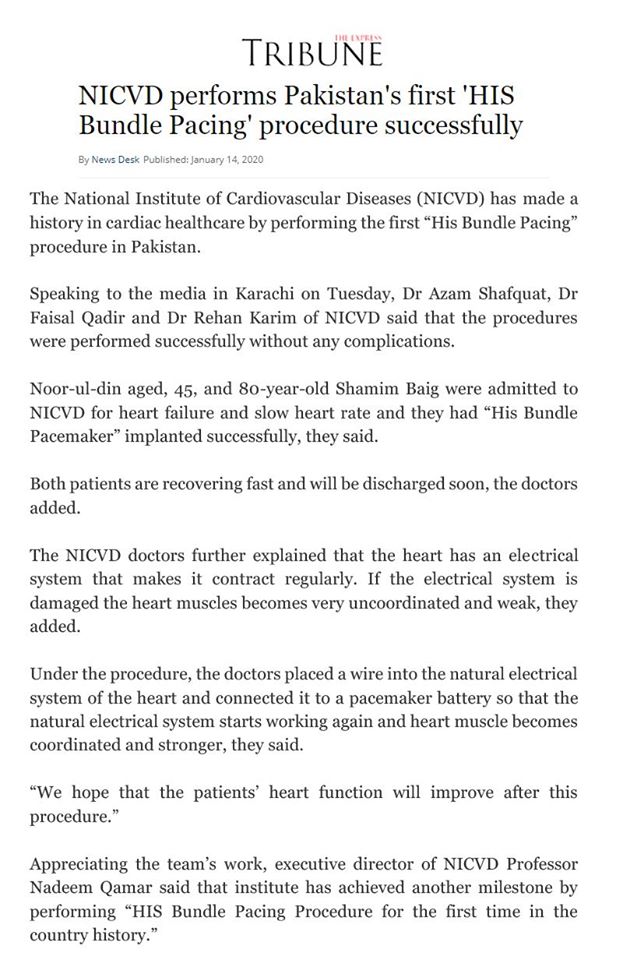 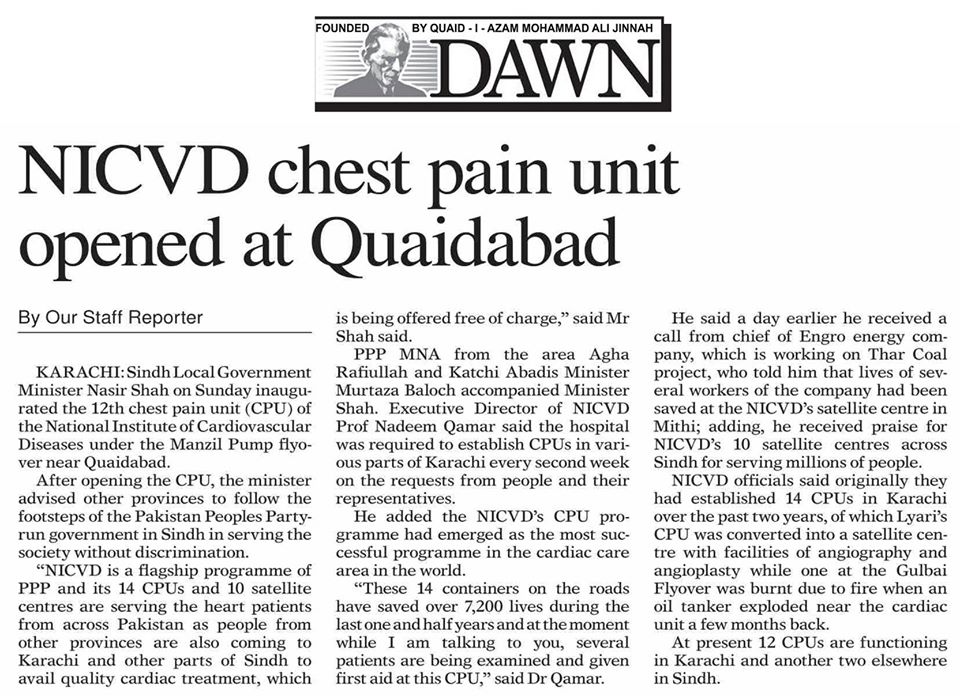 Adviser to Sindh Chief Minister on Law and Environment Murtaza Wahab on Thursday inaugurated the 11th Chest Pain Unit of the National Institute of Cardiovascular Diseases (NICVD) in the Musa Lane area of Lyari and urged the NICVD administration to open one such chest pain unit in the central prison so that lives of prisoners could be saved and others could be provided cardiac health facilities if required.

“Instead of using containers for politics and blocking roads, the Pakistan Peoples Party is using these containers for serving ailing humanity and inauguration of 11th Chest Pain Unit of Karachi and 13th in Sindh is an excellent example of this service. I would urge the NICVD administration to also think about establishing one such chest pain unit in the central prison Karachi to facilitate prisoners and save lives of those having heart attacks,” Wahab said while speaking at the inauguration of the 11th CPU of the NICVD.

Executive Director NICVD Prof Nadeem Qamar, chief operating officer of the institute, Azra Maqsood, Malik Hamidullah, Haider Awan and other officials of the NICVD were also present, while public representatives of the area as well as a large number of PPP workers attended the ceremony and chanted slogans of their party.

Wahab claimed that the number of prisoners, especially under trial prisoners, was on the rise in jails where thousands of UTPs had been languishing without convictions for years. In order to provide them cardiac-care facilities, the NICVD is requested to establish one such unit initially at the Central Prison Karachi.

He vowed that when voted to power again, the PPP would establish such chest pain units all over Pakistan to provide state-of-the-art cardiac care facilities to the people.

Paying rich tribute to PPP Chairman Bilawal Bhutto Zardari, the provincial adviser said that when the NICVD was handed over to Sindh government in 2011 through the 18th amendment, it was in an extremely precarious condition, but the Bilawal took personal interest in its upgradation, and after revamping the main NICVD in Karachi, he supervised establishment of its satellite centres across Sindh. He said now people from across Pakistan, including Gilgit and Kashmir, were coming to Sindh to avail free of charge, quality cardiac care at the NICVD centres.

“The NICVD and satellite centres as well as chest pain units are providing free of charge, quality cardiac care services 24 hours a day without any holiday. Is there any other institution which is providing such quality health services anywhere in Pakistan?” he questioned and claimed that instead of making tall and hollow claims, the PPP government served the masses, especially in the area of healthcare.

Later, talking to newsmen, Wahab said the Pakistan Peoples Party did not believe in blocking roads and causing inconvenience to general public. She added that if interests of the people would be harmed, the law would take its own course.

Executive Director JPMC Prof Nadeem Qamar, in his opening remarks, termed the establishment of the 11th Chest Pain Unit in the Musa Lane area as another gift for the people of Lyari, saying this CPU was linked with the NICVD’s Satellite Centre at the Lyari General Hospital where all cardiac care facilities, including angiography and angioplasty, were available.

“We are expanding the network of these chest pain units in entire Karachi and the whole Sindh province because these units have saved thousands of lives during the last two years. So far, 7,000 people who were having acute heart attacks were brought to these CPUs whose lives were saved by doctors and paramedics at these units.

“Overall, around three hundred thousand patients have been seen in these containers in Karachi and other cities of Sindh,” Prof Qamar said.

He maintained that the NICVD was likely to treat 2.5 million patients by the end of 2019, and added that not a single penny was charged from these patients against all the modern cardiac care facilities, including cardiac interventions, surgeries, implants and provision of medicines worth millions of rupees.

“No such system of cardiac healthcare exists anywhere in the world which is treating such a large number of patients and providing them top of the line cardiac care services without demoing even a single penny,” he claimed and urged the media to promote the services of the NICVD so that a large number of people could avail quality health services.